Until recently, all was calm in the realms of retail – peaceful, tranquil, not a White-Watcher or Wildling in sight. However, in their infinite (?) wisdom (??), Google have descended from their throne and declared war on their civil serving subjects. 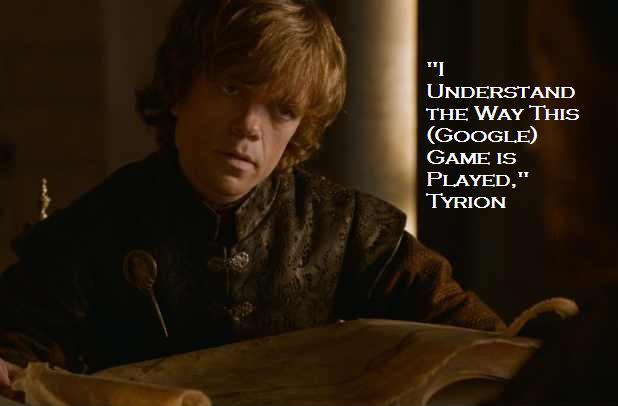 When it came to retail searches and advertisements, King Rober…we mean…Google has always been very clear cut in their SEO affairs. Upon a search for a product (Game of Thrones box sets for example!) You will be returned a page with the following featured:

However, it appears in recent times, Google have taken some very Joffrey-esque steps to shake things up a bit.

This is the new view you would be greeted with upon conducting the above search: 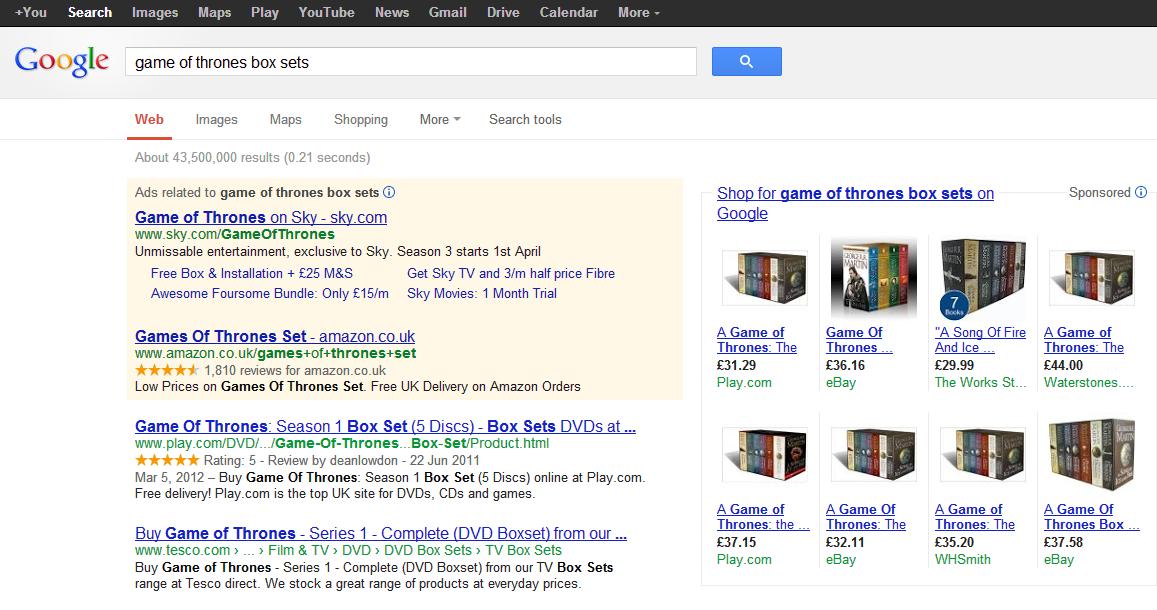 As you can see, the previously unaltered area of retail is now displayed on the far right, with a clear ‘sponsored’ symbol in the corner. In this new regime, Google have replaced the previously untouched retail listings (detailed previously by suppliers who filled out their details to feature) with listings from sponsored (ie. paid) suppliers who are there, alas, as per the depth of their coin purses and their weight in gold.

“Valour is a poor substitute for numbers.”

The logic behind their big change, is Google attempted to “build delightful shopping experiences for consumers in close partnerships with merchants”. Their view is that the ‘paid’ aspect will actually improve the service to consumers as it ensures companies are keeping their information up to date with suitable deals and offerings, which in turn creates higher quality traffic.

However, as a consumer – their trust will begin to wither like a flower in winter.

It has been said and shown many a time that consumers like the idea of ‘natural’ results – the idea that the best option as per Google, is because it is exactly that. With new sponsored listings, it appears that the recommended retailers are not in fact always going to be the  ‘best buy’ – but those who have invested in return for selection. No longer will more local selections appear, and the plight of the small/medium business seems to be fading away into the nether-parts of ‘page 2’.

“You may well have the better claim, but I have the larger army.”

With these new changes in mind, it could prove havoc for smaller merchants. Once again, the future seems to hold not what we should see, but who wants to be seen the most (and lets face it, it will be dominated as our example shows by big brands such as Amazon and Play.)

Whilst other merchants will still be displayed in organic form, its hard to deny that the eye naturally moves to the images of these sponsored sales pitches, and as a result, could see higher traffic than the SEO seas of yesterday.

“Never forget what you are, the rest of the world will not.”

Whilst this may seem negative for the smaller/medium masses out there, it is key to remember the importance of your own personal brand and message.

Whilst you perhaps cannot afford to compete with the likes of Amazon and Play, this is perhaps a great time to invest in other avenues of digital marketing.

Ensure your Local SEO is maximised and you are targeting your audience on a wider spectrum of social platforms.  Whilst Google have taken away one avenue – remember that there are a hundred more in its place, and success is still out there – should you be brave enough to face it and grab it with both hands.