The British Teddy Bear Company are as much an institution in Britain as the Queen and a good cup of tea. So naturally, Codastar wanted to give them the royal treatment with Social Media pages to reflect their natural

First up was the Twitter page for a very special (and very mischievous!) bear indeed – Student Bear. The Student Bear is part of an on-going competition for universities and students alike. The idea of the competition is for photos of the bears to be submitted via twitter using the ‘@’ or the hashtag in creative and clever poses and places.

With this in mind, the twitter background includes ‘Polaroid’ style photos of the bears in action, with a collage of bears in the background of the bio.

The Facebook page was far more diverse, with an interest in showcasing a selection of bears, as well as the student one.

Three tabs were developed; one for Florence Nightingale Bear, one for Armed Forces Bear, one for the Police Bear, and one for Student Bear.

Each tab was designed and created especially with each bear in mind, showcasing pictures of their celebrity friends, links back to the website to buy the bear of choice, as well as key areas detailing the charities and work that the company so selflessly carries out with every bear purchased.

Along with contact details, bear photos, corporate logos, calls to action and the back story of each bear, rest assured bear fans will be keen to explore the new page, and with a new ‘like’ are likely to make a fluffy new friend along the way. 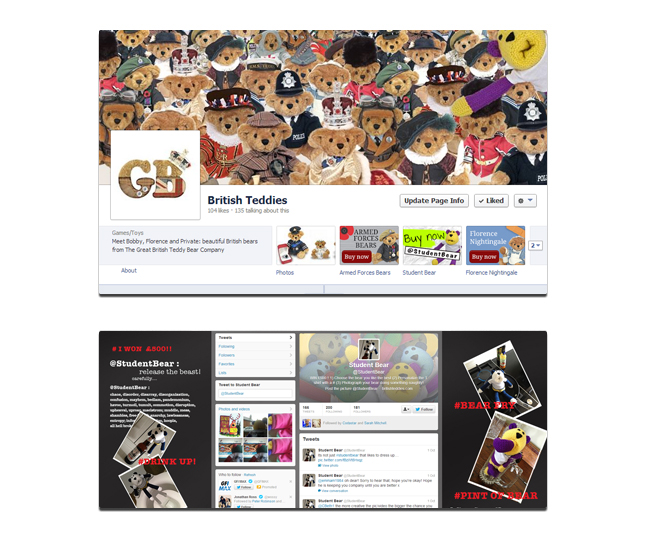