“Extra, Extra, Read all about it!”

This year really seems to be the ‘Year of Google’ already, with multiple updates and changes – its a wonder anyone can keep up (or perhaps maybe that is their rather secretive point?)

Google have recently announced the ability for companies to offer users a single point of access to their application – similar to Facebook Connect/Facebook Social Plug in – allowing users to view a simplified sign-in outside of Google when installing/using apps for Android or iOS. 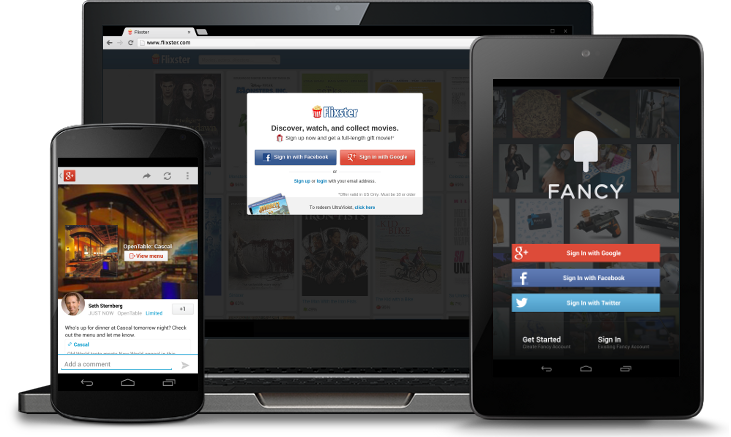 “What are Google up to?”

Lets face it, Google+ is still at least third in line to the social media throne – and that is still a matter of opinion. However, Google are pulling out all the stops and addressing the previous issues that users were citing that G+ simply wasn’t up to the job.

With auto-option sign in, this allows Google (and G+ to expand its role as the ultimate network of choice. No-one likes a lengthy log on, so with the option of a quick Google-info-input, Google are expecting their online registration and conversion (alongside their online engagement) to increase ten fold.

On the upside of this new sign-up-option, Google has promised to only publish information with specific user information and permissions (a dramatic flaw with Facebook’s sign up), and also refrain from almost virally spreading posts and updates all over your social stream – unless completely relevant (although, Facebook promised similar on their launch, so this may be a ‘watch this space’ moment).

“…what does this mean for business?”

It means quite a lot actually! No doubt a large majority of businesses already use Facebook’s plug-in for ease of sign ups and registrations, however as a result, Facebook has become rather polluted and busy.

Already hundreds of big name brands have signed up to the new G+ sign up 0 Shazam, USA Today, The Guardian, and Flixter to name a few.

Not only will the use of such sign ups give these companies access to data for on-site/app downloads, it gives them vital information about users activity.

Using Shazam as an example, the new improved sign in will give great insights into user behaviour – music styles, genres, industries – allowing more targeted in-app and on-page advertising. With over 300 million users, that is a massive amount of marketing opportunity.

As mentioned at the beginning of this blog post, whilst G+ have promised not to become a Spam Artist with torrents of updates and irrelevant information – they have made some interesting steps to promote postive sharing on their site behind the scenes:

An “interactive sharing” button has been introduced on G+ for design teams, which allows developers to direct users to the most relevant pages on their web/mobile apps to ‘buy/review/listen’ or any other action on their site.

The Top Bods at G+ said they are keen to ensure that developers cannot stream information automatically into their users feeds. This is almost applying a ‘white hat’ approach to social marketing, and is indeed a turn for the better. This ‘selective’ sharing that only the best detailed content will be hitting customers screens.

With these changes in mind, users will find themselves faced with correctly marketed content, and as a result we can only predict a rise in conversion across the board. If users are being shown completely tailored (not just a ‘bot’ having a guess) they are more likely to investigate, giving CTRs the chance to soar.

If you take one step further, this will also encourage users to share content and information to specific ‘circles’ (which lets face it, this ‘selective social sharing’ is a fantastic part of G+ and that is leaps and bounds ahead of any competitor) ensuring your social reach is at its optimum.

All in all, we can see nothing but positive in this latest update, and maybe perhaps will give G+ the head start it needs to compete with an ever polluted Facebook?

Let us know what you think below: