Not only can you now integrate the Facebook “Like” button into your blog, but you can also use Facebook’s new commenting system. This basically replaces the usual comments section on a website or blog with a simple plug-in that is branded up to look a little more like Facebook with added Facebook functionality. 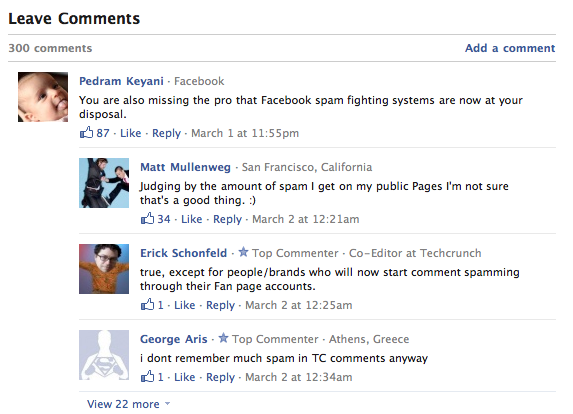 Why do we need it?

Technology website TechCrunch has already been particularly vocal about integrating the new commenting system into its popular website.

Reporter Erick Schonfeld wrote about the pros and cons of the new system and suggested that the main pros are that there are less trolls and spam comments, as people are unlikely to leave negative or offensive comments if they have to reveal their true identity next to them.

Schonfeld also points to the “social virality” of using the new commenting system. This means that when someone comments on a website or blog post that uses the new system, their comment will show up on their Facebook profile. In the long run this means that if you integrate the new system, you could increase traffic to your website and at the same time increase the chance someone will engage with your content.

However, there are some things to consider before you make the leap and add the new system to your blog straight away. Firstly, many people are unable to access their Facebook accounts at work, so this new system will stop them from engaging in content during work hours. Secondly, not everyone is on Facebook and there’s no support for Google or Twitter IDs meaning a lot of people will undoubtedly miss out on commenting.

Contact one of the Codastar team and we will let you know if the Facebook commenting system is right for you and how you can go about installing it onto your company blog.