Last week, online giant Google launched a new social network called Google+ (or Google Plus). It was released by invitation only at the beginning of last week but now anyone can request an invite in order to sign up and join. 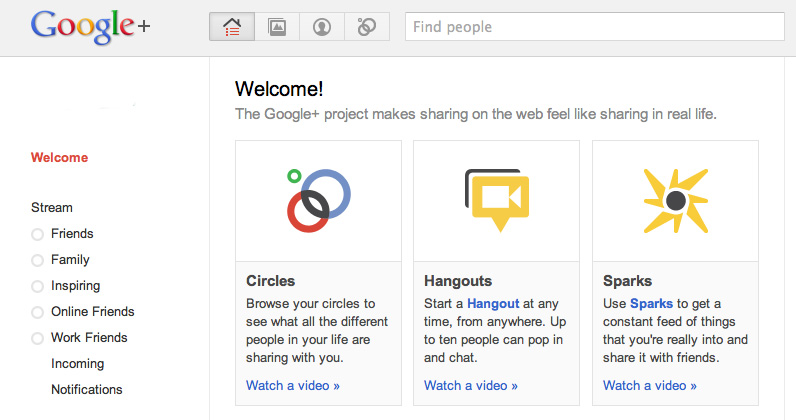 Google+ is a social network designed and created by Google. In many ways it looks and works like Facebook, but there are plenty of other new and exciting features available to users as well.

Here’s a run down of the key elements of Google+ and how they can benefit you.

In the top Google+ menu bar there are four buttons, to access your Circles, click on the button on the far right hand side.

Google+ is different to Facebook in the way that when you want to “add someone as a friend” or “follow” them, you must add them to a Circle.

This means that you can send certain updates to certain Circles. For instance, you might want to write an update about not feeling very well, but you might not want a potential client to see it.

You have complete control over your Circles and can add people to certain ones, rename them and re-organise them. People won’t see which Circle you add them to, so you can really take the time to organise them so they suit you.

By clicking on the Circles button you can organise your Circles, see who has you in Circles and look for people to invite to Circles as well.

In the top Google+ menu bar there are four buttons, your Home Page, Photos and Profile are the first three.

Just like Facebook, on Google+ you will have a Profile which stores basic information about you, a section for your Photos, as well as a Home Page which contains a News Feed of updates and content from the people that you have in Circles.

In order to fill in your profile simply press the “Edit Profile” blue button in the top right hand corner of your Profile screen.

On the Google+ Home Page there are lots of things you can do, starting with filtering content based on Circles. So for instance, if you just want to see what your “close friends” Circle is taking about, you simply check that box.

The News Feed works in the same way as Facebook, you can add an update containing just text, photos or links and then you can see everyone else’s below. You’re able to comment on it or even +1 it, which is Google’s answer to the Facebook “Like”.

You may have seen Google’s +1 button beside Google search results in recent weeks. Although it is a little different, it’s best to think of this button in the same way as a Facebook “Like”.

Users click on it when they think a post is good and worth sharing. This will then display a +1 count next to that result and it will also display the content on your Profile.

Hangouts is a kind of quick, easy-to-use and fairly informal video conferencing tool which you can use to talk to your friends. The Google team have designed Hangouts to fulfill many purposes, from a quick chat with a close friend to a networking call. The great thing about Hangouts is you can talk to more than one person at once for free!

There are many other features that make Google+ a little different, but these are our pick of the first few to get you started!

Will it be open to businesses?

In various statements to the press, Google has stressed that for now the current Google+ profile system is designed for individuals and not businesses. However, it certainly seems as if integrating business and marketing uses into the platform is going to be the next step. A Google spokesperson told the IT Pro business website:

“We’re starting Google+ by looking at ways to improve sharing and communication between users, but we’re working quickly to provide a way for businesses to engage with their customers as well…”

“Profiles are now limited to individuals, not businesses at this time. But stay tuned. In the meantime, businesses can begin being involved in Google+ by adding a +1 button to their site.”

So it seems that although profiles specifically designed for businesses aren’t up and running quite yet, they will be in the future, which will work alongside the +1 button which can now be integrated onto external websites, in the same way as Facebook’s “Like” button.

There are also plenty of other ways businesses could benefit from Google+ other than just setting up a business profile. For instance, the Hangouts video feature would be ideal for business conferencing and the Circles functionality is a great way of networking with the people that matter.

To learn more about Google+ then check out the official website, or get in touch with us here at Codastar if you want some pointers, hints and tips about how to get started.

All images via Google and Google+.

One Response to “An introduction to Google+”