With Facebook having come on leaps and bounds from those first early days back in 2004, with new formats and facilities with each update, making it even more interchangeable – and in most cases, even more confusing.

So here is the low down on one of their “back office” features, and a beginners guide to what Open Graph is all about.

Although the term might not be one you have heard of in every day conversation, there is no doubt you will have come across Open Graph at some point – without even realising!

In a nutshell, Facebook describes Open Graph as the ability to “deeply integrate into the key points of distribution on Facebook: Timeline, App Views, News Feed, and Ticker”. In Laymen’s Terms, this means you can promote your product/service/app etc using a platform that mimics familiar Facebook features (“Like” etc). 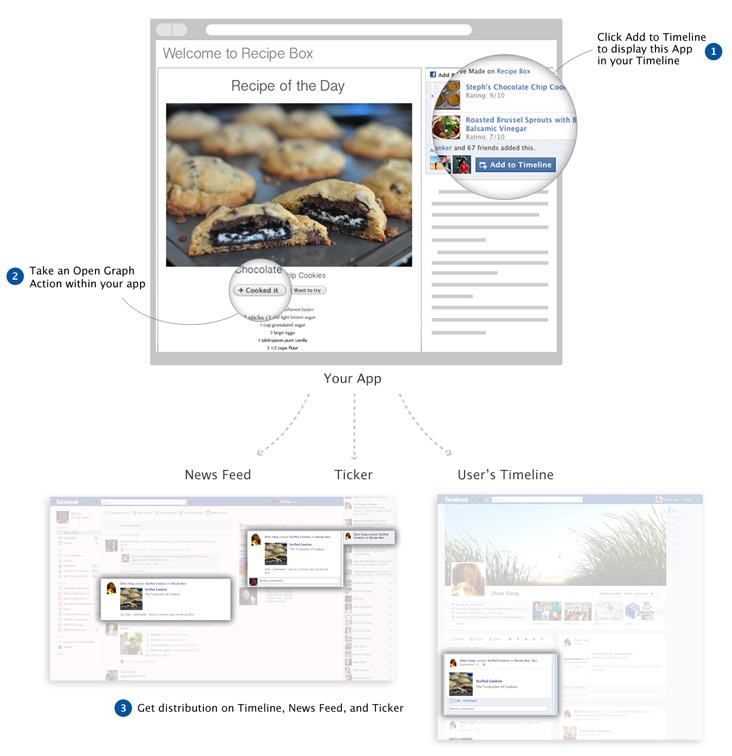 Open Graph enables you to interact at a far greater level with your users, which in turn (with the use of the scrolling side bar timeline) gives greater impact and information to their connections, giving your service/product/app the greatest of promotion.

Once a User adds your app to their timeline, app specific actions are shared on Facebook via Open Graph. This in turn becomes an important way of how your users express themselves on the platform, making you an important aspect of their (and in turn, their friends) experience on Facebook.

In a nutshell, Open Graph centers around the “User > Action > Your service/product”    idea.

For example, you run a company that holds cookery classes and training, and promoted recipes via Facebook. When users visit the page, they are able to click on a “cook this” (mimicing the ‘like’) button, producing a status/update such as:

These updates produce data recorded in reports via insights, and can produce valuable information for your ongoing Facebook campaigns.

To look into Open Graph in a little more detail, it can overall, be split down into 3 key areas:

Put simply, Actions and Objects are the building blocks of Open Graph. Actions are the high-level “interactions” users can perform within your application, and objects are the “things” users can act on within the app (As mentioned above, previously just a ‘like’, but can now be tailored using other more app-centric verbs and nouns for greater and deeper interaction).

Once you have defined both, your objects must then be created and published. These objects are simply pages with <meta> tags containing the Open Graph information in the <head> section of the page, including data such as the name of the object, its title etc.

This is a rather tricky area to explain, and we have included a nice easy to read diagram from Facebook to explain it a little more visually. In essence, when users take an action in your app (say “listens” to a song via Spotify) the following occurs;

Social channels are the various areas that can be posted on within Facebook, and are done so accordingly when using Open Graph. When the user has completed the action using your app, the “action/object” is posted into several areas within their page, visable to not only the user, but to their friends and connections also.

For those tech savvy among us, you are able to develop said apps and code yourselves, and Open Graph is fairly simple (in coding terms) to be added to your website. However, it can get quite technical, and with all code, the wrong letter, number or symbol in the wrong place and the whole things goes belly up. Always speak to a professional developer, and ensure that your website is designed and socially integrated to its full potential.